The end of May also signaled the end of Ezra’s Middle School years. He grew about a foot from 6th to 8th grade, and takes great delight in being taller than his mom. He says middle school was OK, but 7th grade was the worst.

The promotion ceremony was loooooong given that there were over 500 kids in his class. Here’s the video of them calling his name:

He must have been happy to be finishing up middle school — he actually let me take some photos of him.

Ezra finished his bread-making ROPEs project with the big culmination night on May 2nd. All of his classmates presented their projects — it was quite an event with lots of interesting stories of successes, failures, and lessons learned. Ezra did a great job on his presentation, and he warmed everyone’s hearts (and stomachs) by serving samples of his bread.

And here’s a photo of his golden brown delicious (“GDB”) ciabatta.

During Spring Break, Ezra embarked on the final bread of his ROPEs project: cinnamon rolls.

This batch was very good, if perhaps a little overbaked. Still, no one said no to seconds … or thirds.

Ezra decided to add another bread to his repertoire in March when the opportunity came up to bring food for a party in his Spanish class. He made a test run on the weekend for the family. They were delicious but perhaps a little overbaked.

A couple of days later he made smaller versions to take to school. Judging from the crumbs that came back that afternoon, they were a big hit.

On March 7th we took Ezra to SFO to meet his classmates for their overnight flight to Philadelphia. It felt very strange to just leave him at the airport! We kind of hung around for a bit with the other lost, awkward looking parents wondering what we were supposed to do. And then we left and he mingled with friends and played with his butterfly comb.

Early Friday morning I got a sunrise photo from him with the message “Kill me I’m so tired.”

He rallied though and enjoyed a trip to see the Liberty Bell and, even more so, his first Philly Cheesesteak.

They also went to Valley Forge that day and happened upon a film crew making a movie.

After the first day, I got fewer photos from Ezra but they were keeping the kids really busy sightseeing in DC. I think they saw every monument and museum in town, along with the Capitol and the Library of Congress.

They also hit a couple of souvenir shops.

And he got a giant quarter.

One funny story. Before he left I told him that the social media personality “God” had planned to have an anti-Trump billboard on a truck in DC during the time that he was there. He sent me a text on the last day with this photo and the message, “Holy shit.”

Finally, on the evening of March 12th they returned home safe and sound. Of course, he was most happy to be able to snuggle his cats again.

Ezra’s birthday was a scattered affair this year. We got him a new monitor for his computer and decided to give it to him on the Saturday morning before his birthday (which was Monday) because he only gets screen time on the weekends and that way he could use it. Needless to say he was very excited about that.

He chose to do a family birthday dinner at our local ramen place over the weekend, and then on his actual birthday, after Finn’s hockey practice, we had cake.

In March Ezra moved on to his first loaves of sandwich bread. Spoiler alert: they were very good. Finn requested that he make some every week. Here are some photos of the process.

We all enjoy the rising process — it’s like magic!

Ezra moved along in his ROPEs project to pizza making on January 12th. It’s another two-day process with a starter and then lots of folding, resting, and rising time.

Then there’s dividing, shaping, and actually making the pizza.

Finally, it’s ready for the oven and the new pizza steel that we got per Uncle Bob’s recommendation.

And the proud baker shows off his first pizza.

It was really good! It may be beginner’s luck or maybe just that we were used to store bought pizza dough, but this pizza was astonishingly delicious. He made it several more times over the next couple of months and it was always great, but I still think the first time was the best.

Ezra continued on his bread-making roll and made a focaccia on December 16th. It’s a long process because of the starter that needs to be done the day before and then all of the folding that takes about 7 hours. It came out pretty good but stuck to the pan a bit and Bruce had a grand time trying to pry it free. Nevertheless, it was quickly gobbled up!

Ezra’s in a different program at school this year called Connections. It has a more hands-on, project based learning philosophy and there is an 8th grade project called ROPE (Right of Passage Experience). Students are meant to choose something to learn about, find a mentor, and then present at the end of the year on all that they learned. Ezra decided to do bread baking and asked his Uncle Bob to be his mentor. His first item to bake was banana bread, and he made his first loaf on October 14th.

It turned out pretty tasty!

He’ll continue to make some additional quick breads and then move to yeast breads. He’s looking forward to cinnamon rolls which I think are the last item on the list.

On August 19th we went across the bay to visit Vanessa, Thomas and Reba in their new digs in Piedmont. After a visit at their house, we went to Cat Town in Oakland since all of us are cat lovers. Ezra, the cat whisperer, had the most success interacting with the cats.

Also cat related, earlier in the month, Bruce had installed the swinging backyard chair we’d gotten for Ezra and I snapped this photo of him and Emmy.

Teenager in the house! 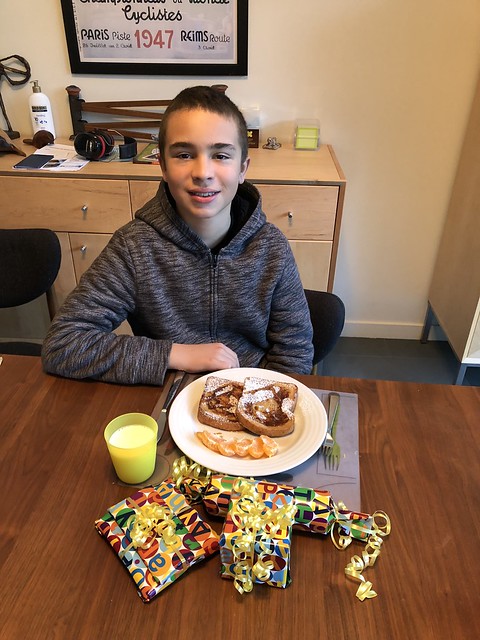 OK, so he’s a sleepy teenager with a cold, who we forced to get up early-ish on the Sunday morning of his birthday so we could have breakfast together before Finn’s hockey practice, but a teenager nonetheless.

This year, in trying to come up with a good birthday activity for a kid who didn’t want to have a party, Bruce thought of having one-on-one time with each of us. Luckily, Ezra is still game to hang out with his family so it all worked out. On Saturday, Bruce and Ezra took BART to San Francisco to spend the day at the Exploratorium. They had a great time and there was ice cream, so, you know, all good. There were not, however, any photos of the day.

After they got back, Finn took Ezra to Teaspoon, the local all-the-rage bubble tea shop. They rode their bikes there and had an independent, brotherly outing.

On Sunday, I finally got my time with Ezra — we went to see Black Panther. I think I got the best deal of the three of us. It was great! Wakanda forever! Ezra liked it because there were lots of explosions. And he got a giant bag of popcorn and an Icee. Don’t tell his orthodontist. 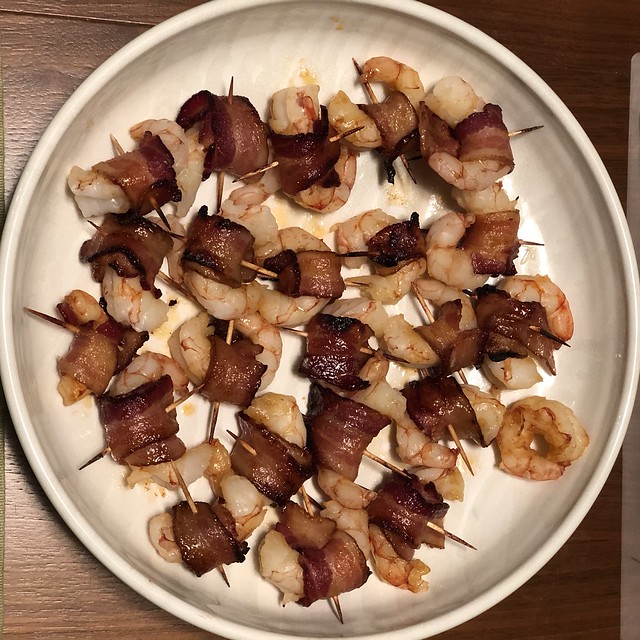 So that’s what he got! It was delicious — Bruce made it with a maple Sriracha glaze. Yum! 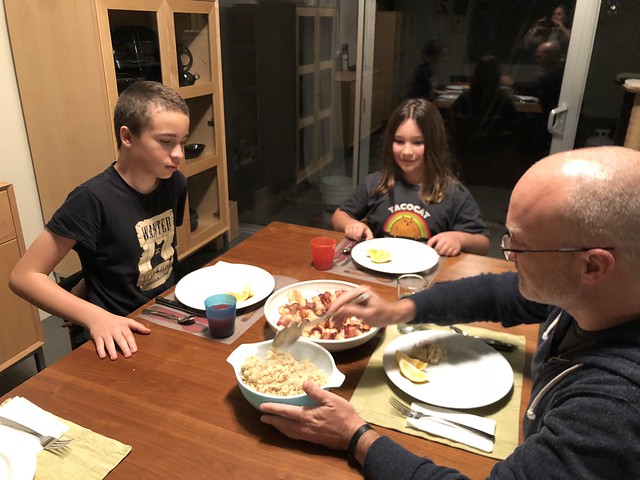 For dessert I made chocolate cupcakes with vanilla buttercream frosting. 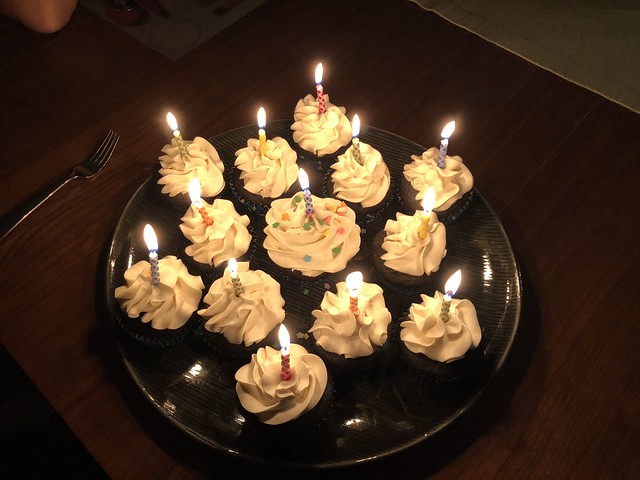 And ice cream, of course. 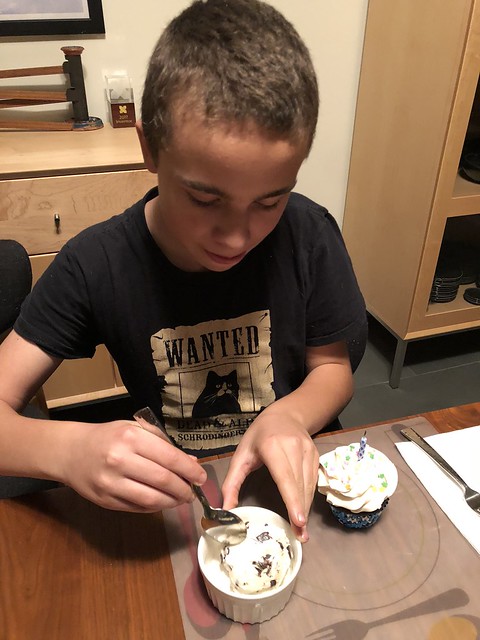 I think he had a good weekend despite his cold. Hopefully he feels as loved as he is.

Ezra’s been studying armor from the Middle Ages and he was disappointed that his teacher hadn’t assigned any projects for the unit. Actually, there haven’t been any projects at all which is unfortunate for him. He’s been really interested in the subject matter, especially the helmets, and Bruce encouraged him to make one even if it wasn’t assigned. And so, they made one together — a Great Helm. 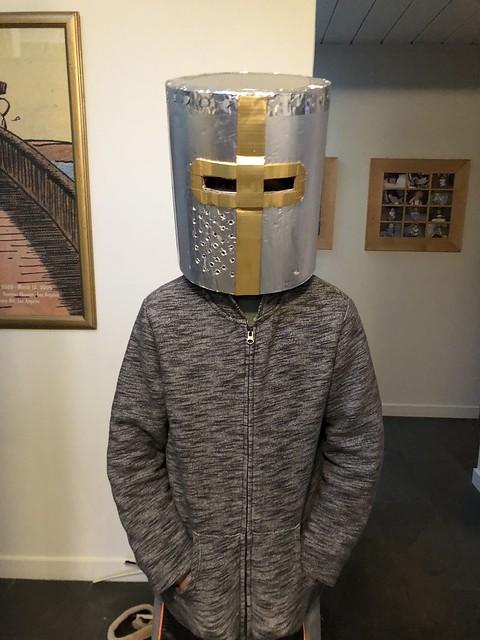 He took it to school and his teacher loved it and said he should bring it back for Open House.

Another perk from Ezra’s Living Skills class was the homemade fettuccini alfredo we made in early February. He’d loved it when they made it in class, so I bought the Kitchen Aid pasta attachment set (which they use at school — talk about lucky kids). I don’t have many photos because I was busy helping. 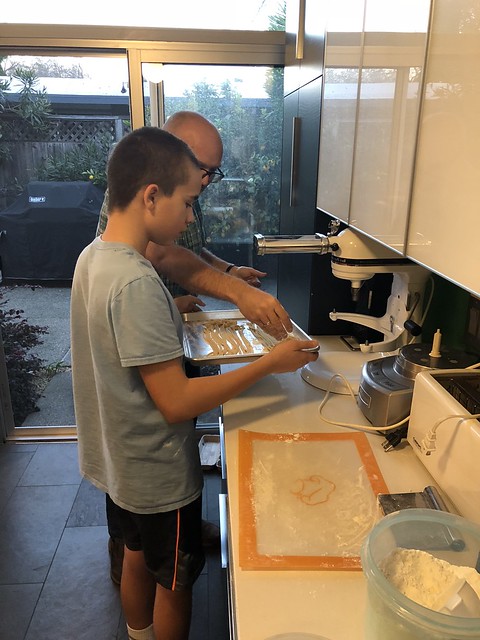 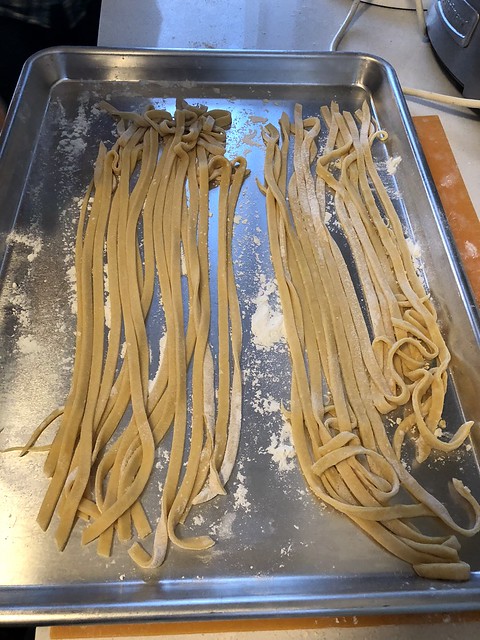 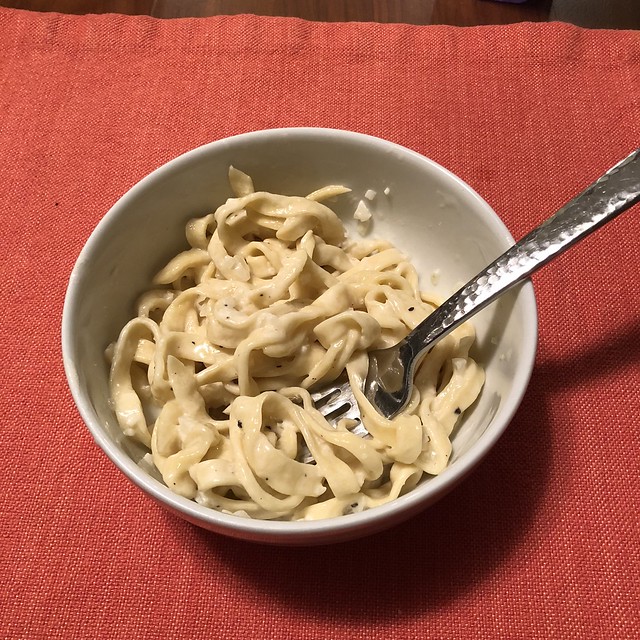 Ezra took a “Living Skills” elective this year, mainly because it’s a prerequisite for the Advanced Cooking class he wants to take next year. It’s been great — he made himself a pair of pajamas, learned how to do laundry, and had a long section on cooking. That part has benefitted us all, especially on December 23rd when he decided to make egg drop soup for dinner. 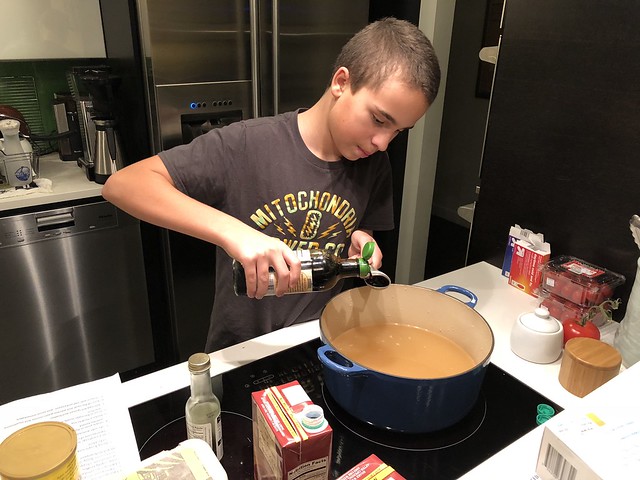 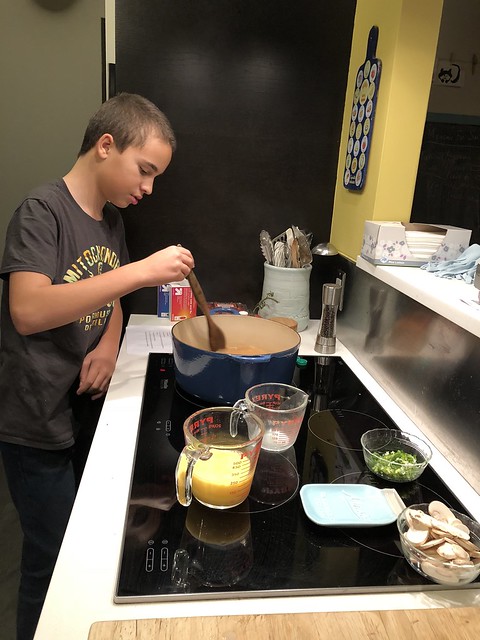 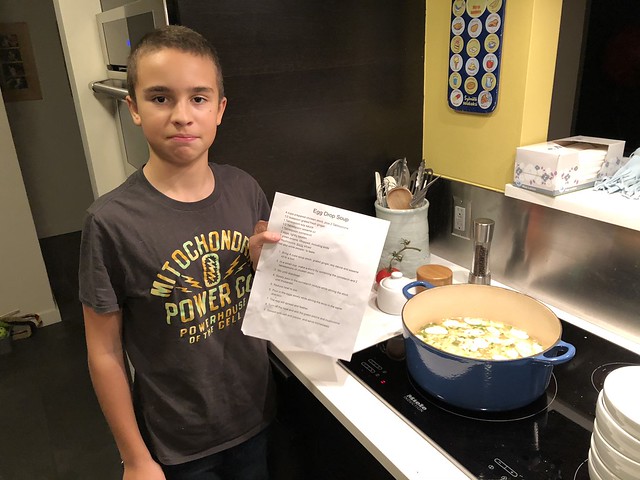 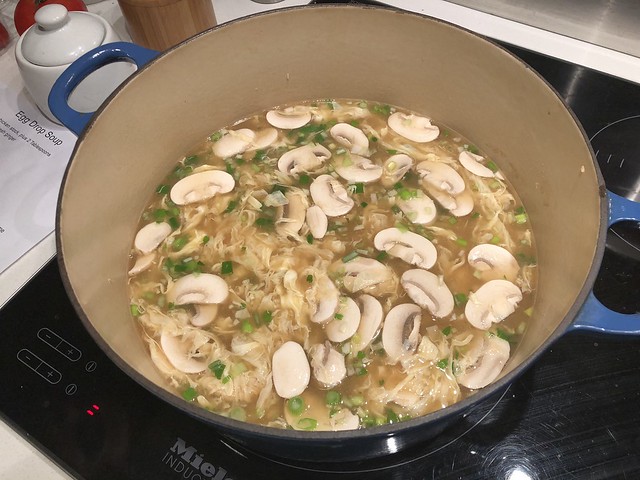 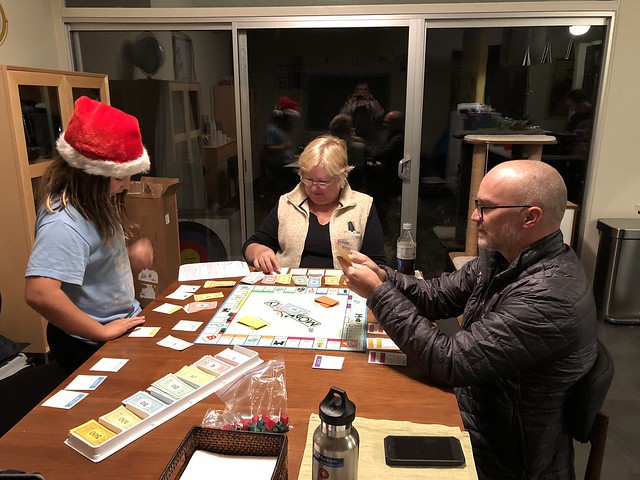 Ezra also made a gingerbread house at school right before break, which was pretty cool. 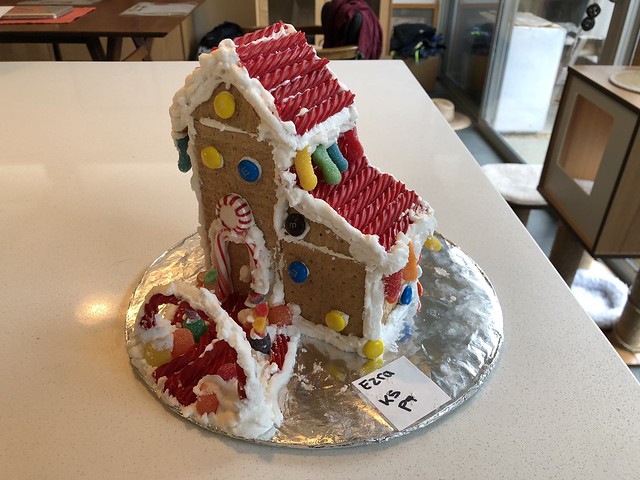 I love that he took this class and I’m looking forward to more cooking from him in the future!