For the Fourth of July we made a return visit to Mt. Tamalpais’s Steep Ravine campground. On the way up, we stopped in San Francisco for a hike and lunch break at a foggy, yet picturesque, spot. 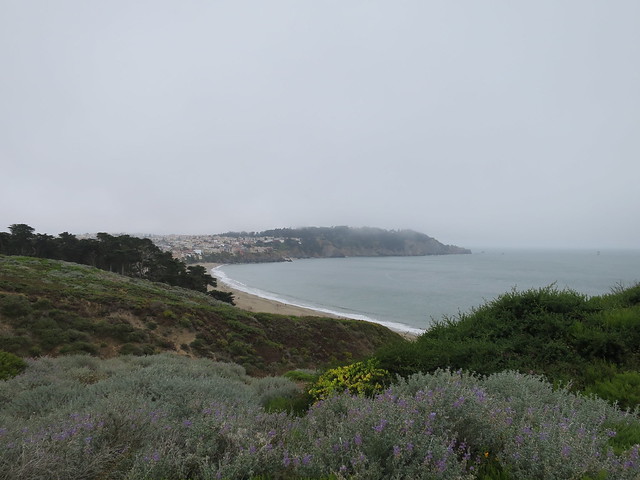 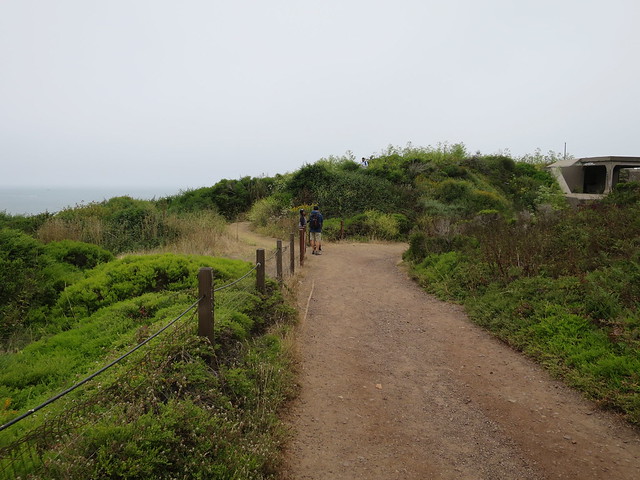 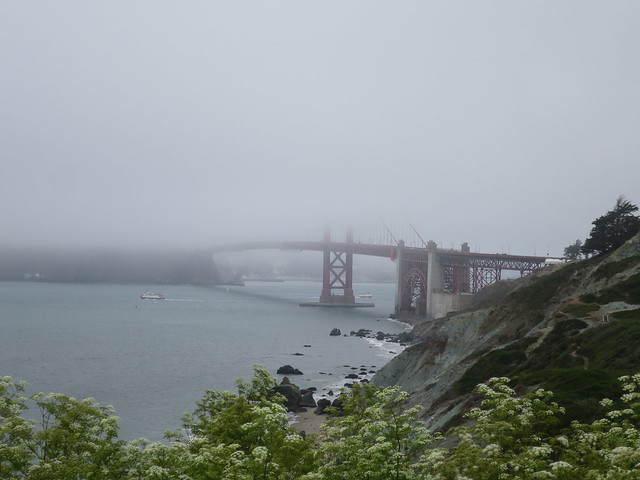 Once we got to the campground, we spent some time hauling our stuff in wheelbarrows from the car to the site. The boys were a big help this time, even though they did plenty of moaning and groaning about it. We were all happy to be back in this beautiful place. 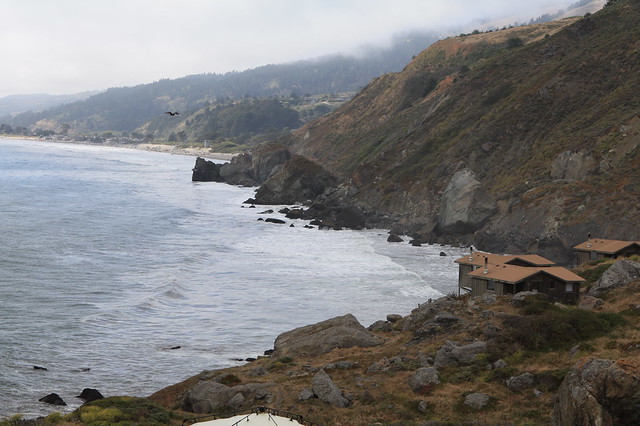 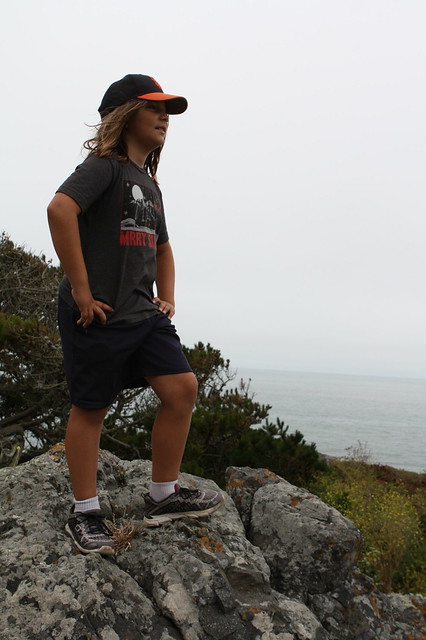 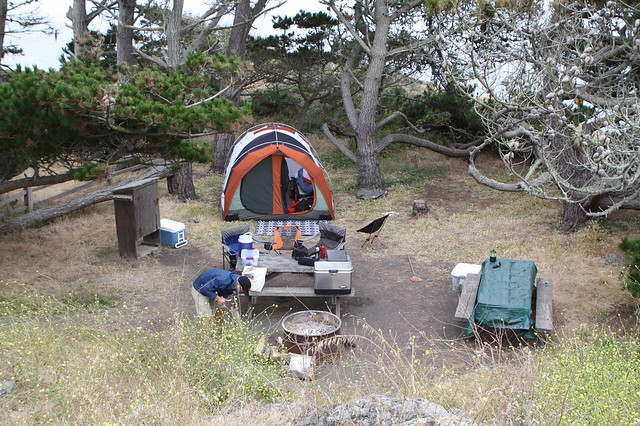 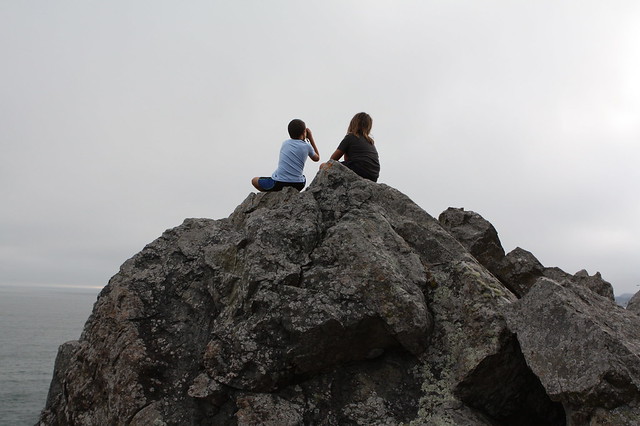 It was chilly, so we had dinner and made a fire early. (It’s hard to tell it was cold by the boys’ clothing, but I was already in a parka and warm hat.) 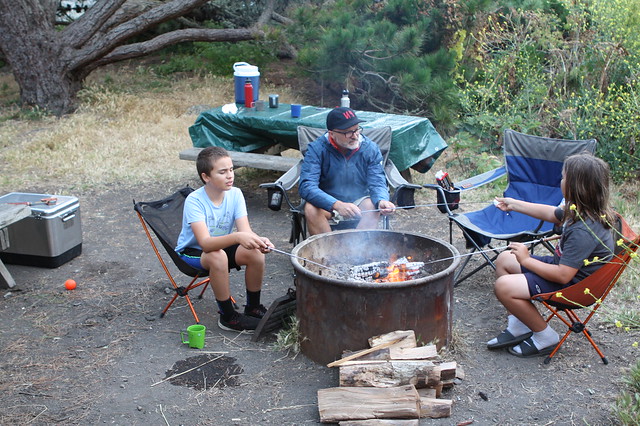 We upped our s’mores game this trip thanks to Christina’s suggestion. 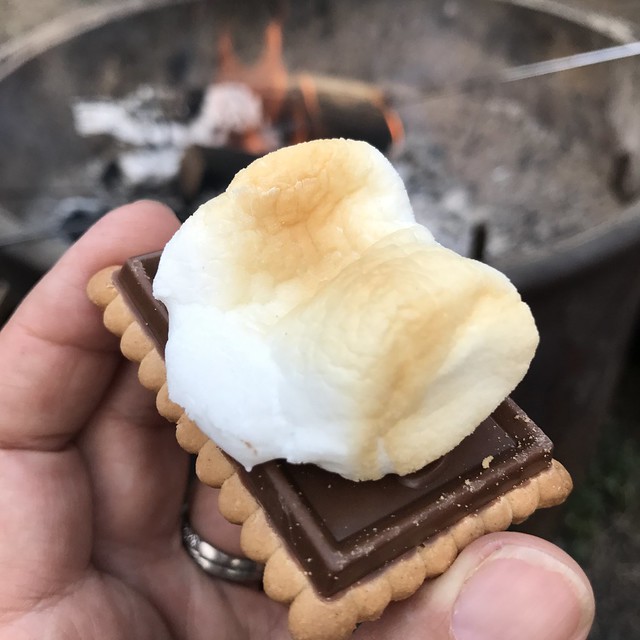 Here’s our campsite at dusk. The sites there are pretty separate and it really feels like you’re out in nature all by yourselves. 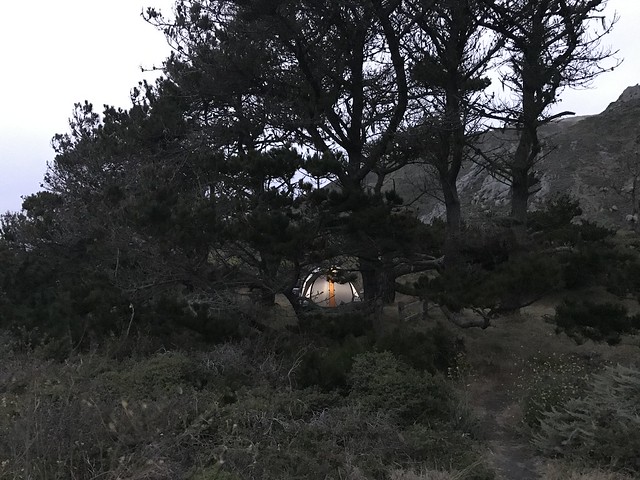 Our night was quite eventful with a persistent raccoon trying to help himself to our food supply. We anticipated him after he chowed down on a whole loaf of bread last year, and we made sure all the food was secure before we went to bed. However, he still managed to wake us by making a whole lot of noise trying to get into an empty food container. Bruce scared him away, but then a few hours later we woke up to his noises again! This time, he was tearing at our tent trying to get to a backpack that we had inside the tent. He must have smelled whatever remnants of food were in it, and he tore a hole in the tent trying to get to it. Needless to say, Bruce was not happy. He scared him away again and luckily that was the last we saw of him.

The next morning was cold and foggy — to be expected. 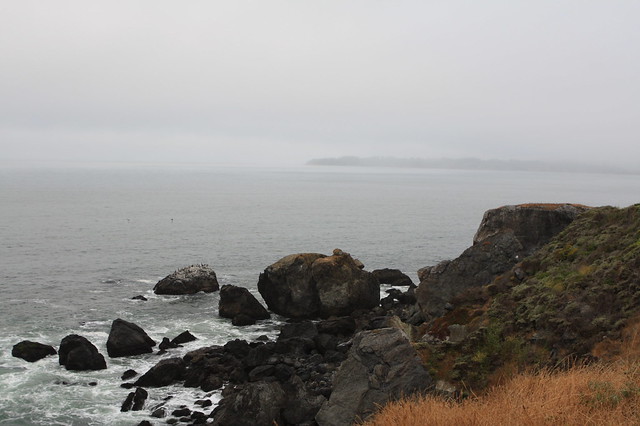 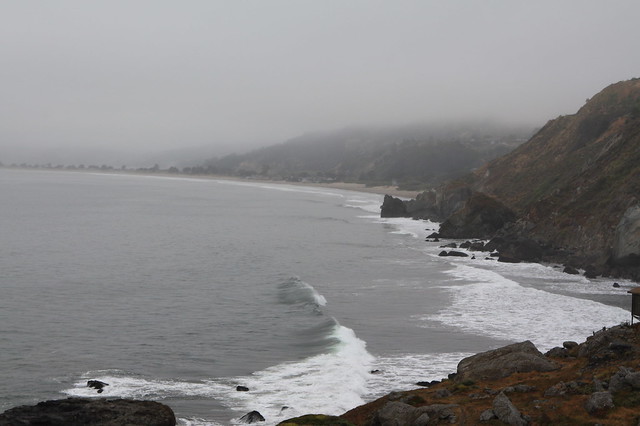 We spent the morning close to the campsite and looked for whales and dolphins. We found them! Sadly, my lens is not the right equipment for catching them, but I tried and I’ve cropped and zoomed a couple of photos. 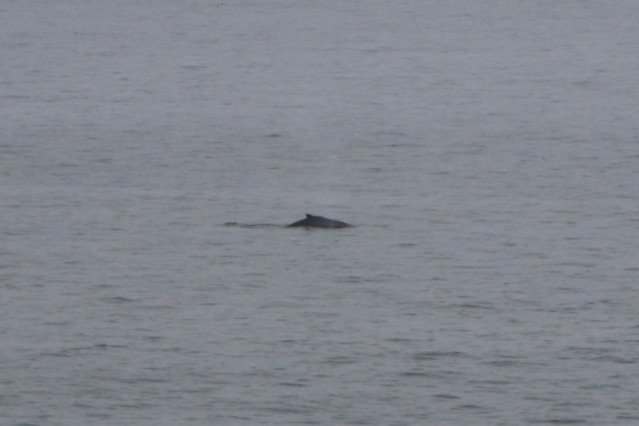 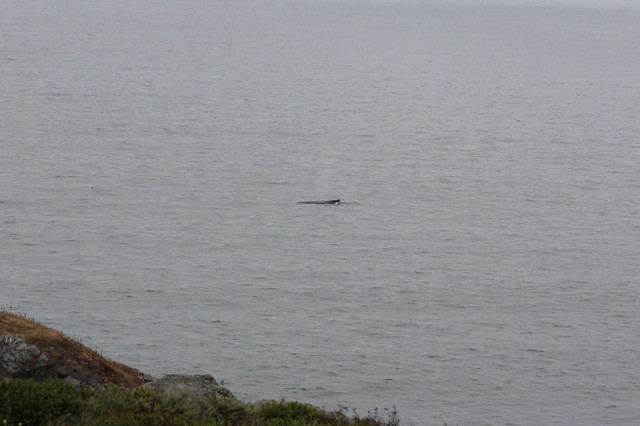 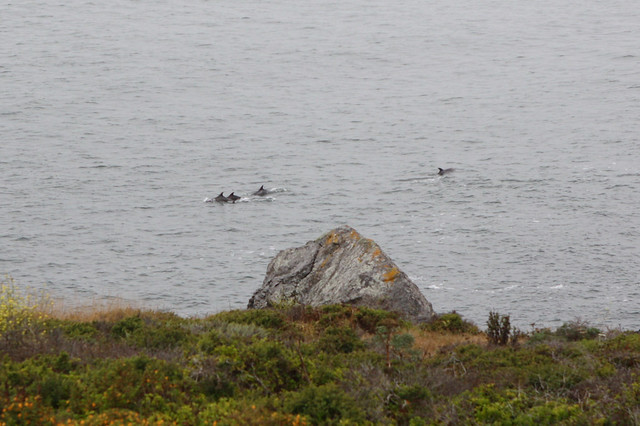 I also got a video.

Even though it’s hard to capture on the camera, the experience of seeing the whales and dolphins roaming around is not to miss. We had some great vantage points too. 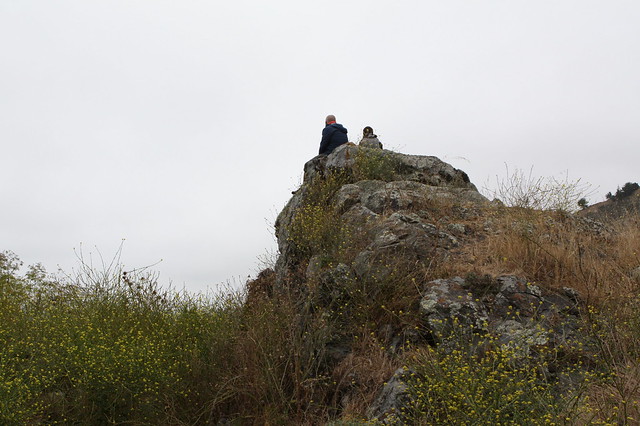 There were other animals also — birds, bunnies, some sort of small rodent that was actually really cute. And, a couple of monkeys in a tree. 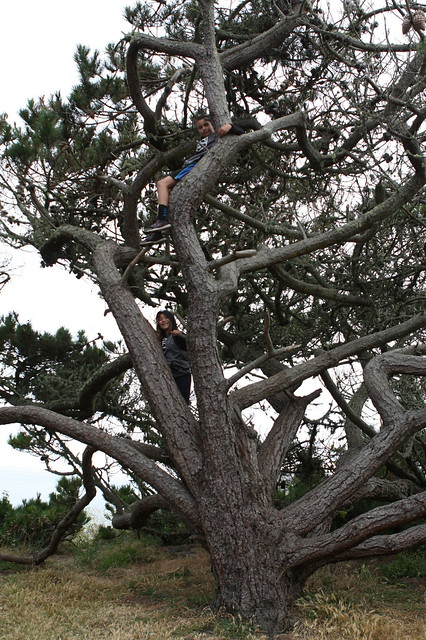 After a while, we decided to go on a hike. We started out on a short trail that starts at the campground, but soon found that it led to where we could access the road (Highway 1) that had been closed due to a big landslide. We weren’t close enough to the slide to be in any danger, and it was really fun to have the road all to ourselves. 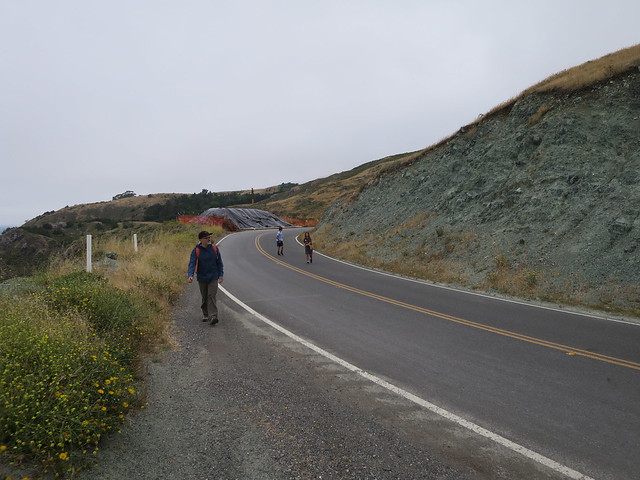 We stopped at one point and went out to a rocky area where we had a nice view. (I think Ezra was looking at ants in this photo.) 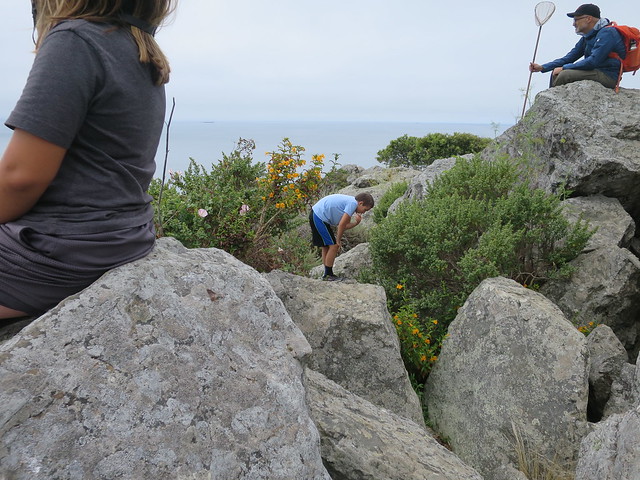 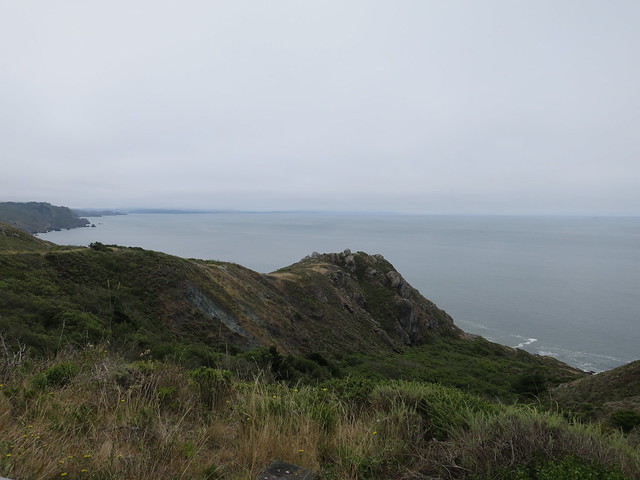 And then we headed back. 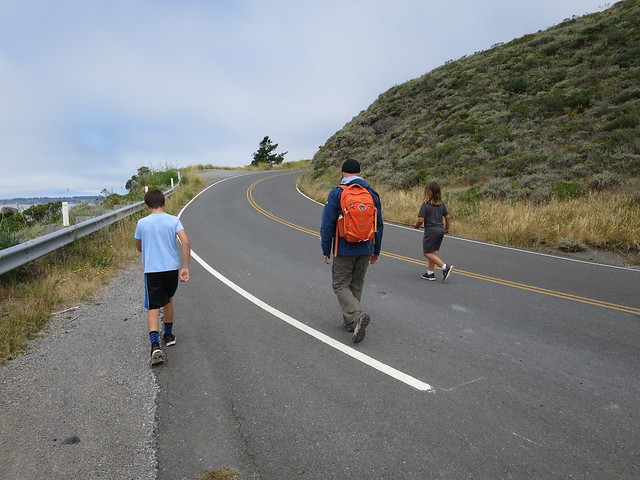 It was clearing up and we planned to head down to the beach. I took this shot of the entire campground. 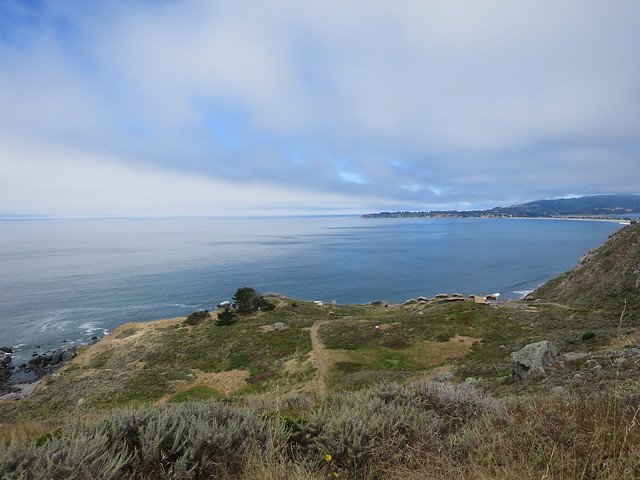 We spent the rest of the afternoon down at the beach. It was chilly but beautiful. 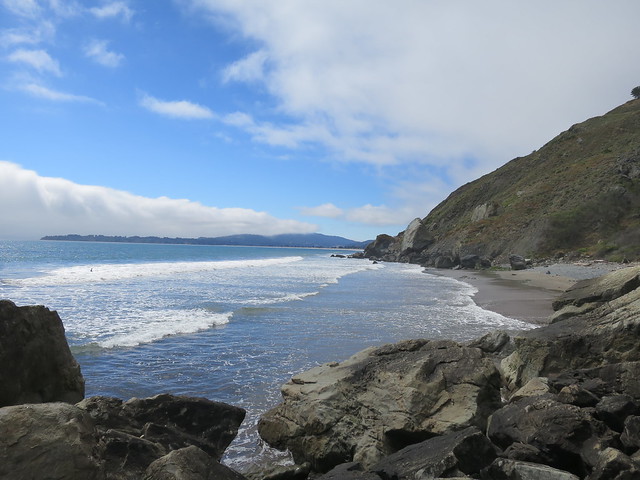 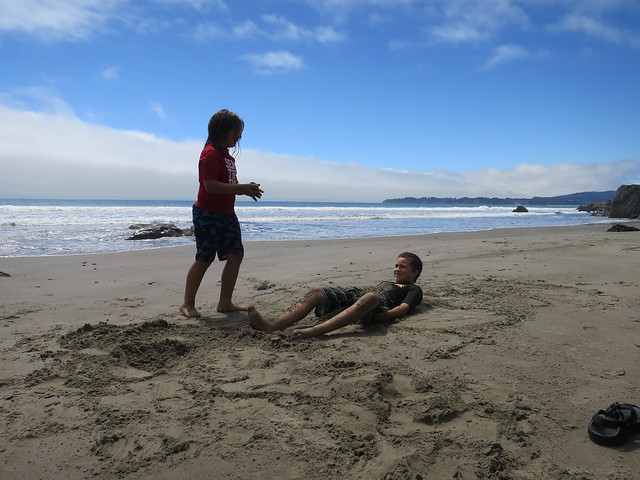 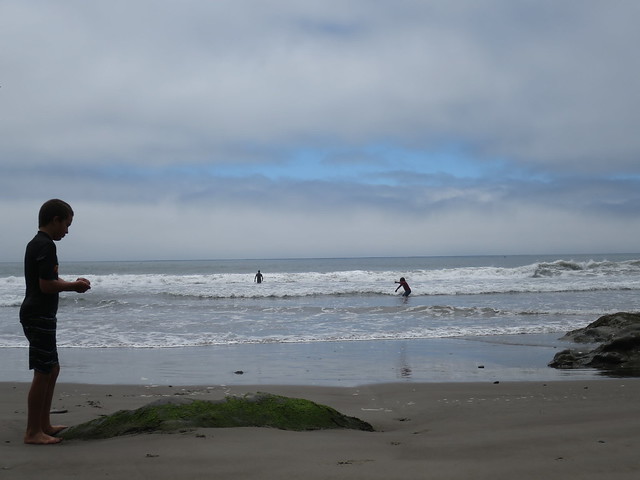 We’d had a lovely time, but Bruce had been having intermittent chest pain and lightheadedness. After we got back from the beach and had dinner, we decided it would be best to skip the second night and head home. With the surprisingly long July days, we had plenty of light to get everything packed up. I was happy to sleep in our own bed that night since I was coming down with a cold. The rest of Bruce’s story is not blog material.

We hope someday we’ll be able to reserve one of the cabins at this campground. There are only about ten of them and they are very hard to get!